Life on the A-Side

(Mouseover any identifier to decode)

From the viewpoint of a fresh hire our stock had risen considerably although the grizzled veteran controllers (many of whom were WWII vets and positively ancient, but some of whom might only have been in their early thirties—still ancient by the standards of a 22 year old), while polite, tolerated us as raw recruits who had yet to demonstrate a speck of ability. From the standpoint of real, headset wearing, shrimp boat pushing, strip marking controllers, we hadn’t, but we felt pretty good making it this far. You do have to understand that in 1968, there hadn’t been any hiring since 1965 and those who had come in during the previous spate of hiring (probably ’64-’65) were still working the A-Side and training briefly on the D-Side before going back to the A-Side (as explained in Chapter Two).

As a fully certified A-side, I spent perhaps seventy percent of my shifts working the A position. Although we still covered Flight Data, the influx of hiring that had begun in early ’68 and continued well past 1970 guaranteed a fresh crop of trainees in Flight Data, thus my flight data skills were decreasingly necessary (to the great relief of the Flight Data supervisors). Even better news for me (and those supervisors) was that my Flight Data time was almost exclusively in High Flight Data. To be honest, if I had to put a number to it, I would guess (no way of proving it) that from, say, September of ’68 until December of ’69 when I went to D School, I could probably count on two hands the number of shifts I worked Low Flight Data.

Usually an A-Side position covered from two to four sectors, although certain busy sectors necessitated a dedicated A-Side for it alone. “Busy” meant not so much “lots of airplanes” busy, but very complex due to adjacency of one or two sectors in other centers and/or two or three approach controls (many non-radar in those days) as well as special activities, such as military operations.

CAE Low was one of those. The sector ran from halfway between AGS and CAE up to a point about 40 miles southwest of SOP. It abutted both ZTL and ZDC, as well as our own internal sectors, AGS, FLO/CRE, CHS, and SAV, as well as SSC Approach and CAE Approach (non-radar). In addition to all the activities with those entities, we had to deal with High Altitude for transitioning aircraft (low to high and high to low)—not only our own internal operations but adjacent ones as well.

For example, although CLT wasn’t the hub then that it is now, there was still sufficient traffic to and from it to create an impact on us as the inbounds from the south had to descend from our high altitude sectors through our low altitude sectors into ZTL’s FML Low sector. The reverse was the case with southbound CLT departures.

While primarily a radar function, aircraft such as Electras or Gulfstreams (the turboprop) would stay entirely in the low structure and needed flight plan processing. Let me explain. The flight plan of any aircraft that departed an airport within, say, fifty miles or so of an adjacent facility had a flight plan processed before departure in both the departing facility and the adjacent facility. Thus, an Electra off CLT southbound would have a departure strip prepared by ZTL Flight Data who would deliver it to their own FML sector. The FML A-side would then call our Flight Data with the flight plan (as a proposal). Our Flight Data would write up all the strips necessary for our facility but without any times (because it wasn’t active) and the runner would take all the strips out to the sector.

When the aircraft departed, FML (either D-Side or A-Side) would call us (either the D-Side or sometimes the A-Side, but in any event, a sharp A-Side would pick up the line when the D-Side did and catch the information before the D-Side had to relay it to him). “A-Side!” he would call (unless he saw that we had already gotten the departure) and we started running the times on all the strips previously processed.

When we were done (we gave the D-Side the first strip before we ran the rest), we would either distribute the strips to all the pertinent sectors or give them to the runner as he made his way around on trips from Flight Data. I don’t remember now if they did the same with the jets or if the High A-Side had the pertinent high proposal strips and just took a phone call from the Low A-Side and ran the high strips himself. 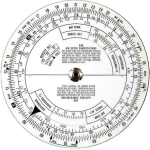 A little tidbit that came to mind as I was reviewing this—active flight plans received in Flight Data not only required the preparation of the requisite strips, but part of the preparation was to calculate times for each fix posting. Flight Data School wasn’t just about knowing what strips to prepare—they also needed times on them. We calculated the times (using a circular slide rule, left) for each strip. This is basically an aviation computer and has premarked indices for TSD (time/speed/distance) calculations. I found this image online. It’s the exact model we used (and I have). I love the internet!

It’s a snap to use. Set the large index marker on the inner ring to a speed on the outer ring (above 100 knots, it’s in tens of knots, so 120 knots would be set to 12). Read the miles on the inner scale (figuring your decimal point as necessary), and read the time (in minutes or tens of minutes) on the outer scale. It sounds harder than it is in practice. In any event, with about five minutes of practice, you’d be as good as we were processing times on strips.

The strips on a close-in proposal would be delivered to the sector sans times (since it wasn’t active). An A-Side worth his salt picked up his calculator as soon as he could and figured “plus times” for each strip in the flight plan. That way, when the flight departed, all he had to do is add each plus time, first off the departure time, then off each previous strip in the flight plan. It seems obvious now, but many is the A-Side who went down the tubes by not having his act together for when it got busy.

And as an aside, while theoretically we calculated times based on the filed true airspeed and the distance between fixes (making it clear how in depth our map making practice had been), that was really only necessary, we learned when we got downstairs, when running aircraft other than air carrier (or military) jets. For them, we learned the minutes between fixes and added them up directly. At jet speeds (420 kts–480 kts) there may only be one minute difference in that speed range for the distances we had in ZJX, which was close enough for our ATC purposes, even if we did lose radar. And since we processed hundreds of the same flight plans every day (differing only in callsign and specific type), knowing that ILM to AZALEA was 15 minutes and AZALEA to GATEWAY was also 15 minutes (for examples), it took us perhaps five seconds after writing the rest of the two strips for that flight plan to add the times.

Perhaps now you have an idea of why we checked out on Flight Data before training on the A-Side. All of those Flight Data skills were necessary to be an A-Side. But there was more. Getting a sense of the D-Side’s job was an important factor for the A-Side, as the next step up the ladder was D School. The concept of “stick time” first came into play when working the A-Side because often, when the A-Side wasn’t particularly busy, the D controller would invite the A-Side to “plug in” with him (actually get out the headset that had been gathering dust since Flight Data school and connect it to the same jack the D-Side used) and listen along as he performed his duties.

Stick time. I attribute much of the success I had in training—both D School and downstairs on both the D-Side and the R-Side—to stick time. That was what you did when a controller offered you an opportunity to get some real live (and unofficial) time on a control position and get to talk to airplanes. There was D-Side stick time, too, but I liked talking to airplanes, and that was the direction in which I focused my chances.

Actually about 10% of my success was due to my years of ham radio and flying. I was thoroughly accustomed to radio communications and from the flying, well versed in ATC talk. I don’t know how I got started, although I remember my very first transmission (seeStick Time). Soon, though, particularly in High Altitude I was taking every opportunity I could to get stick time. I look back now and realize that some of those guys who were so generous in letting me work a position must have been able to see something I didn’t even know I had.

After all, I was 22 (and 23) years old, obnoxious (I know—hard to imagine, huh?), arrogant (again—can’t imagine…), etc. For all that, they let me sit down, put their job at risk, teach me things and let me learn by doing. I’ve often thought that by the time I got to D-School I probably had more time on the radar than a lot of guys did when they finished radar training. It was a huge advantage. Without putting too fine a point on it (and jumping ahead a bit) I went from starting D-School in December of 1969, through D training, then R training to a fully certified journeyman controller in about four months. I later figured out I had an aptitude for air traffic control, and that was part of it, but the major part of it was preparation and experience gained with stick time.

But, I’m getting ahead of myself—time to go to D-School.

©2011 The WebButcher
All Rights Reserved